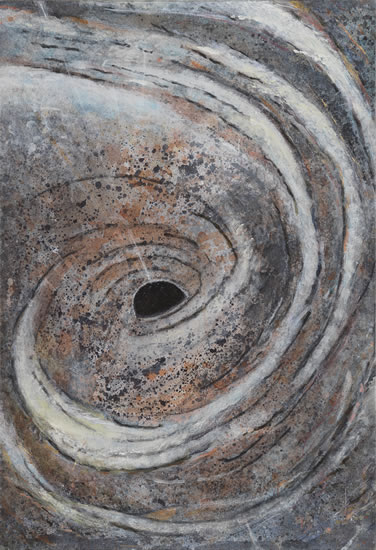 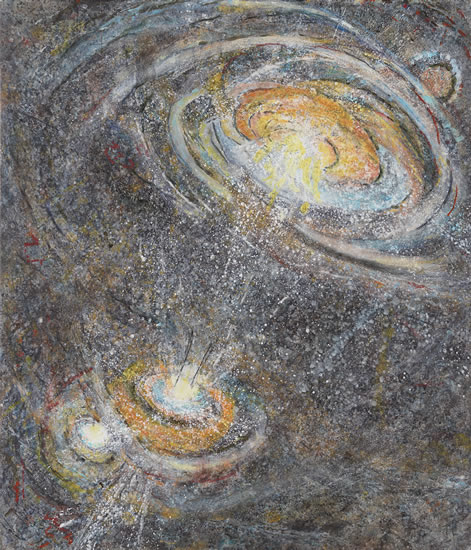 Cosmic Sublime, an exhibition of new paintings by Sandra Lerner interweaves theories in astrophysics with the intuitive mysticism of Taoism, in which the cosmos is seen as one inseparable reality and in which there is an inter-relationship of all things. The exhibition will open at the June Kelly Gallery, 166 Mercer Street, on October 10, and the works will remain on view through November 12.

In an essay in the exhibition catalogue, art historian and critic Donald Kuspit writes, “Lerner’s cosmic paintings are scientific and mystical at once… Lerner’s paintings are expressive masterpieces, indeed, ingeniously original abstract expressionistic paintings” Kuspit says the task for Lerner’s paintings is how to represent the unrepresentable - the sublime, the sense of being in the presence of unrepresentable excess or limitlessness ….” Science and art converge in Lerner’s paintings, writes Kuspit, as they do in Kandinsky’s work, who used science to justify his turn to abstraction. Kuspit says further that Kandinsky’s knowledge was superficial compared to Lerner’s as her Macrocosm paintings make clear the theory of quantum entanglement. (An occurrence when pairs or groups of particles are generated, interact, or share spatial proximity in ways such that the quantum state of each particle cannot be described independently of the state of the other, even when the particles are separated by a large distance.) Macrocosm IX, 2019.

In describing this current body of work as representations of limitless cosmic space, grounded in a scientific understanding of its complexity, Kuspit says, “Lerner knows her astrophysics, at least to everyday understanding. She is clearly on an odyssey in cosmic space,” Macrocosm VIII, 2019.

Yet he urges the viewer to see there’s more to Lerner’s paintings than meets the eye no matter how they excite it: to view them as exquisite illustrations of a scientific idea is to be blind to their visionary complexity Lerner says her paintings draw upon a long exploration of the similarities between Eastern philosophy and the latest theories in physics and cosmology. She writes that because of her training as a concert pianist, music has been a big influence in her art. “I see the transposing of musical chords and repetitions in a similar way to variations of color and shape throughout my paintings. I work in series because I like to explore an idea as fully I can, and then push it to the limit.”

Lerner says she is in awe of the mystery and beauty of the creative energy that permeates everything in the cosmos. She quotes Albert Einstein, “The most beautiful experience we can have is the mysterious. It is the fundamental emotion that stands at the cradle of true art and true science.” “My enduring exploration of the fabric of the universe, its ever-changing patterns, gives rise to and parallels my own creative development. I conceive my art as a spiritual, psychological, and intellectual journey.” For her time and space are metaphors for human relationships. Kuspit says in the last analysis her paintings are about the cosmic import of human relationships.

She has created sets for performances by Eiko and Koma, the Japanese dancers and choreographers. The oneness inherent in our universe, amid the multiplicities, is something I feel deeply. Taoist philosophy, cosmology, physics, and nature have informed my art and inspired my creativity and being.